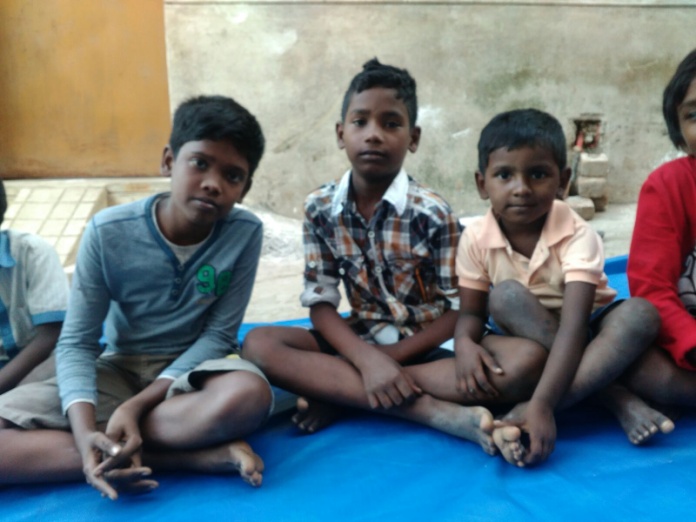 Joshva aged ten years is studying in 5th Standard at St. Xaviera School, Little Mount, Saidapet. He was regularly attending school and was studying well. But during and after the floods, the schools were closed and Joshva spent his time playing in the nearby Coovam riverbed. Even after the school reopened, he spent his time playing without going to school, since he had lost all his educational aids in the flood. He felt ashamed to go to school and face his friends and teachers without the much needed books. His parents thought that he was attending school regularly. The school authorities also did not inform his absent in the school to his parents. Whenever his parents requested him to study, he used to escape and played in the river bed.

REAL, supported by PLAN India, started the Child Friendly Space (CFS) in Rengarajapuram as part of the Chennai Floods Response programme. Joshva visited the CFS and saw the recreation and play materials with many indoor games. Joshva started regularly visiting the CFS, simply avoiding the Coovam riverbed for his recreational activities. The Facilitator Ms. Y. Amalorpava Mary at the CFS motivated him to understand the importance of education and disaster management. The play way methods taught him good and healthy habits and encouraged him to attend the school regularly.  He made new friends at the CFS and became playful and energetic, with venues to open up his mind once again. Without the support he gained at the CFS, Joshva might have become a school dropout.

CFS has given Joshva an opportunity to realize the importance of education. The centre has helped a probable drop out to continue his studies.

Dairy Value Chain project aims at substantially increasing the number of milch animals in Kattumannar Koil block, with opportunities for realizing increased incomes for the project participants through improved animal husbandry practices and enhanced access to services and market, where the intensity of the issue of poverty is higher. The project implements activities related to establishing feed shops, fodder plots, para-vet services, linkages with banks.

Besides, it has been involved to implement the pilot project to create awareness on  Recycling & Plastic Waste Management in 5 schools and 2 adjacent communities of Poonamallee Region.

The project with Global Village Renewal is involved in the construction of school toilet and kitchen at Keezhvailamur.

Established various Child Activity Centers in the villages.1,400 children improved their academic and creative skills. Over 300 children were trained on media skill. 2,100 women in 110 SHGs were trained on children rights and child protection. Capacity building of 470 women on dairy development and provided financial assistance. Increased their income by 40%. Established Milk by-product unit and 50 women are getting regular employment.

Established various Child Activity Centers in the villages.1,400 children improved their academic and creative skills. Over 300 children were trained on media skill.  2,100 women in 110 SHGs were trained on children rights and child protection. Capacity building of 470 women on dairy development and provided financial assistance. Increased their income by 40%. Established Milk by-product unit and 50 women are getting regular employment

Health, Learning and Equity through WASH in schools

Plan India supported in renovating WASH infrastructures in 5 schools in Sengadu Region and organized various trainings, camps for the children to exhibit thier talents on various skills. Besides, it has been proposed to construct IHT for 21 families in the same region.

About 100 small and marginal farmers and landless women sought assistance for the organic cultivation aspects, organic production unit and vegetable garden and goat rearing aspects. As many as 26 different kinds of events including training programs, exposure visits, meetings etc. have been facilitated during this year. As a part of institution building 37 farmers clubs and 59 women SHGs were formed in 15 villages.

Habitat for India supports in construction and renovation of houses for the poor families and repairs of toilets, infrastructures in schools.

The project with CARE India, is new intervention in Kanchipuram District which deals with enhancing community well-being of rural Tamilnadu. The project facilitates the households to access various government entitlements and benefits.